First of all, I want to thank everyone for the wonderful support you gave me in my reentrance into the Blogosphere. My last post had the largest participation of any post that’s appeared on my blog, ever.

Why did that happen?

I prefer to think of it as the old Birds of a Feather adage. 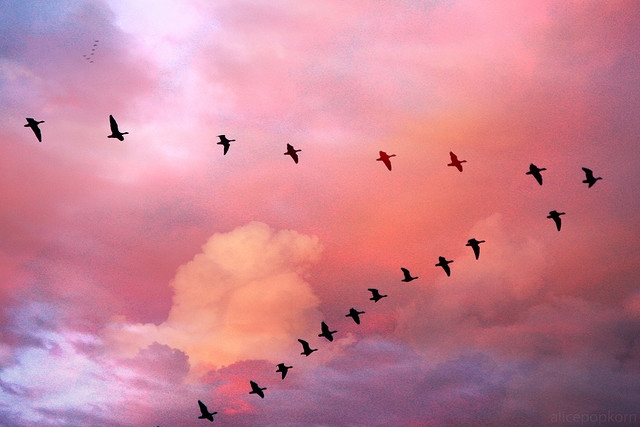 You know. We flock together.

No, I’m not talking about the Pelican, although we’ll get to him in a moment.

See, I think this goes far beyond people who are drawn to others who have similar interests.

If you’ve ever watched a flock of birds in the sky, there’s no doubt you’ve noticed they usually fly in some kind of formation. Rare is the bird that flies alone.

It’s interesting that flocks of birds may differ in size, occur in different species and seasons, yet it is customary that flocks have special names such as a raft of ducks, a charm of finches or a horde of ravens.

It seems that birds flock together for many reasons. They congregate to forage, to protect, for camaraderie, to produce and raise a family, for warmth and aerodynamics.

Wouldn’t you say that as writers, we can relate to all of the above?

We forage together for craft and publishing information. We protect and look out for one another. We form a close alliance with other writers. We nurture our creativity when we produce our books. And we would never consider leaving one of our fellow writers out in the cold.

Yet, we are also aerodynamic. We assemble in groups and organizations that allow us to sense a change in wind patterns that enable us to make changes in our life or in the publishing world. We flock together, thus we gain the support to weather any change within current conditions.

When we gather together, we use our energy in a more efficient way. It becomes an act of survival, thus none of us are left flailing, floating aimlessly alone. Perhaps if we adopt the custom of naming our own specie of flock, we could call ourselves a gaggle of wanas!

So again, thank you for all your support. Y’all gave me a huge lift and an immense feeling that I am not flying solo. I’m truly a member soaring in formation along with the flock.

Because Birds of a Feather. You know. We flock together!

Now about the Pelican.

Jennette Marie Powell related the short version of a rhyme that her grandfather used to say that I thought was apropos. “A strange old bird is the pelican. His beak can hold more than his bellycan.”

Well, I sure received a belly full of suggestions. Some were rather inventive. Who knew a Pelican could be so popular. Although, I have to say there were a few of you that were leery of him. While some thought it would be a good idea to wear a hat, others found him to be professorial. And that of course had an influence on your recommendation for his name.

Yet, in taking into consideration everyone’s suggestions, be it here on my blog or on Facebook, the name that was submitted most was, believe it or not, “Murphy.”

It looks like I now have an Irish Pelican named Murphy!

And you know what? I think it’s a good fit. I like it!

Oh, by the way. Let me reassure you that Murphy and I had a chat. And he has promised to be on his best behavior and has agreed to act like a perfect gentleman. Since he and I just met, I have no choice but to take his word on this. But if you should notice him getting out of line, please let me know. What can I say? I now share this blog with a bird! Who would’ve thought?

So what do you think? Has your life, like my blog, gone to the birds? Do you prefer to fly alone or would you rather soar with the flock? If you were to compare yourself to a bird, what kind of bird would you most likely be? What is your latest project that you are trying to gain liftoff?

I want you to know, you guys really Rock!

32 thoughts on “Birds of a Feather…Really?”