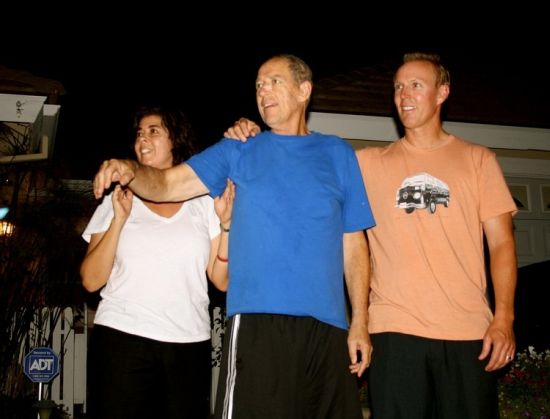 A couple of weeks ago I discovered an article on the front page of the local section in Yahoo news. You’ve probably heard about the terrible shoot out in a Hair salon in Seal Beach, California. It was a horrible massacre and the people in the area were terribly devastated. That was until later in the evening when a large group gathered together at a candlelight vigil in front of the home of a highly revered member of their community.

Being intrigued by this article, I clicked onto the link to read more and as my eyes began to study the picture and caption to the story, I gasped. I sat there stunned in disbelief not wanting to acknowledge that I recognized this person since I hadn’t seen him in many, many, well too many years.

The person I’m referring to is James Brian Harris. He was my favorite teacher in high school, in fact he even attended my wedding. But to more than hundreds, perhaps thousands, he is now widely known as “Coach Harris” for the Varsity basketball team at Ocean View High School in Huntington Beach, California.

For the past 35 years this man has been the only head coach that the school has ever known since first opening its doors. This might be quite a feat on its own, but of course, there is more to this story.

It seems that Jim Harris has not only been the Varsity basketball Coach for the OVHS Seahawks all these years, but it was just two years ago, in 2009 that he was given an award by the city of HB for leading his team to their 600th win! The history of this unique man and his team of numerous talented players has been well documented by all the local newspapers including the Los Angeles Times. But that is not all.

Over the years, this kind compassionate family man lived, taught and coached here and won the reputation of becoming one of the most loving, magnanimous man this community has ever known. I encourage you to take a few moments and browse through the copious heartfelt comments at Coach Harris’ Team! the next time you visit Facebook. I assure you, it will not only make quite an impression, but it will also touch your heart.

You see, when I ran across this short, unpretentious article in Yahoo News, it was meant to be taken as a sign of hope, a little piece of optimism, giving us all courage and faith at the end of a day full of deadly despair. And it did for about a week until we all found out later that this dear man was going to lose his battle to cancer.

After just being granted a clean bill of health in June, Coach Harris developed a cough over the summer and in mid-August had a kidney removed and was told that he had Lung and Kidney cancer. Huh? Needless to say, this has been a complete shock to his family, the entire school and the rest of the community. It’s crazy how fleeting life can be.

So I’d like to take this opportunity to send my love to “Coach Harris” and his family along with countless others who you have touched with your life along the way. A life filled with love and inspiration for your family, the many special students, friends and faculty at school, the community, and especially for the love of that great game called Basketball.

Yes to all of us “Coach”, you will always be thought of as a gentle giant amongst men and a legend that will continue to live on in our hearts and memories throughout the rest of our lives. By the way “Coach”, I hear the lights are back on in the OVHS Gym!

So please tell me, what do you think? Has there ever been a time when a certain someone has stood out in your life? Maybe they influenced you in a direction you might have taken or a decision you might have made? Maybe it was a parent, a teacher, a colleague or mate. Perhaps something they said motivated you to stay the course that kept you on the right track when you were at a crucial fork in the road.

Thank you for your many thoughts and salutations. Take care and make it a great day!

Thank you Everybody!
Karen McFarland

*On a sad note, “Coach Harris” lost his battle to cancer Sunday, October 23rd 2011, shortly after I had written this post. Since then, rumor has it that the Ocean View High School Gymnasium will be named after that cherished man and the prestigious Tournament Of Champions boys basketball playoff will be renamed the “Jim Harris Memorial Tournament of Champions”.

If this all sounds a little bit like the movie “Remember the Titans”, you would be right.

32 thoughts on “A Gentle Giant Turns into a Legend”