I shared this picture on Facebook the other day. I have to say that I am spoiled with all the lush, green vegetation right in my own backyard. Beautiful, isn’t it? 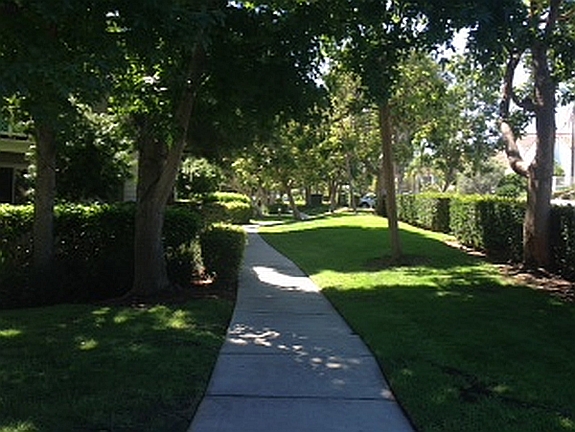 But this is not South Carolina, this is Southern California. And we are in the midst of a drought.

Do you see a problem here?

Yet, in comparison, sometimes as writers we may hit a Dry Spell. Those times when we rack our brains, searching for the right word, the right sentence, the perfect…well, you know. We walk along on a creative path, all green and lush as our subconscious liquidates on the page. And then something happens.

We hit a dry spell.

For some, this may happen all at once. For others, they may notice a drain on their stored creative juices over a period of time. Either way, their well runs dry.

Let’s be honest. Many of us go through our daily routines more numerous than a single human being should be allowed. And some of us are ready to commit ourselves after a long, exhausting day spent fulfilling the many tasks that lay before us.

With that kind of schedule, how is one expected to be cognizant of every single issue that happens in our world? It’s just not humanly possible.

But we in California are in a dry spell and severe drought restrictions have been put into place.

Hello! It certainly took them long enough. I mean, come on, this drought has been going on for years. The water supply is down to an eighteen month reserve. Yes, you read that right. Eighteen months!

Blink, and it will be gone!

Okay, I guess I’m as bad as the next guy because the reality of the situation didn’t hit me until I returned home from my trip from Phoenix last month. And I thought it was dry there. Practically the whole state of Arizona is desert, right? But it isn’t quite in the same league as this western Golden state which has now turned into a scorching golden-brown before our very eyes.

82 percent of the state of California is in an “exceptional drought”, the driest conditions since 1895. Record-low rainfall has sent rivers, lakes and water reservoirs to their lowest levels in many decades, threatening the water supply of many cities. In turn, this has also increased the risk of wildfires, which has already ravaged parts of the state, most recently an area near Yosemite National Park.

Although the drought may alter the way we use water, the people that it affects the most is the farmer. In an attempt to keep up with water demand, many farmers are drilling new wells. Recently, in Kern County, one farmer drilled five new wells at 2,500-feet deep a piece — twice the height of the Empire State Building — in a desperate attempt to tap into new water sources below.

And for the farmers less fortunate? They are bulldozing hundreds of acres of thirsty, but still reasonably healthy crops because there isn’t enough moisture to keep them alive through the worst drought people in the area have ever seen.

There is a growing sense that nobody outside the San Joaquin Valley really understands the far-reaching implications of the drought, how it’s put the main source of the nation’s food supply at serious risk, threatening to disrupt an entire industry and ruin people’s lives.

One farmer went as far as posting a sign on his property that says,

I can’t stop thinking about “The Grapes of Wrath.”

Can you say Dry Spell?

Yet, before we get upset because of the lack of urgency, let’s take into consideration that a drought doesn’t cause the immediate excitement that perhaps a tornado, earthquake or hurricane can. It’s been said that a drought is like watching a movie in slow motion. It’s a slow death, a silent killer—with a potential to be just as destructive.

Here are the top ten suggestions:

10- Check your faucets, pipes and toilets for leaks. Replace your toilet with a low-flow model. That old toilet and a small faucet leak can waste up to 20 gallons of water.

9- Replace your shower heads with low-flow heads which use less than half the water. (I know, I know, I hate then too. But do we have a choice?)

8- Take shorter showers or perhaps take a bath instead.

7- This one’s for the kids. Turn off the water while you brush your teeth!

6- Run the dishwasher only when full.

5- Use recycled water for your plants.

4- Store drinking water in the fridge in lieu of running it in the sink to get it cold.

3- Defrost frozen food in the refrigerator instead of under the hot water at the sink.

2- Take precautions to prevent fires which occur most often in the kitchen.

And the number one suggestion is…

Okay, you caught me. That wasn’t the number one suggestion. I just couldn’t help myself. But it is a real suggestion used in previous droughts across the country. And if we all do our part, perhaps we can help preserve our water supply for future generations, but more importantly, our Farmers!

Although forecasters are now expecting an El Nino weather pattern for Southern California this winter. Yay! But I’m not counting on it. So for those of you who are being plummeted by an overabundance of rainfall this year? Send that excess moisture this way!

As for the creative dry spell? I don’t think those top ten suggestions would be of any help.

Yet like a drought, whether as an individual or collectively, we need to take immediate measures to keep productive. Don’t wait until you’re faced with the dangerous feeling of discouragement. Do whatever it takes to replenish that creative well!


So what do you think? Have you ever experienced a Dry Spell? Did you know how bad the drought was in California? How have you recovered from a lack of creativity? What are your suggestions for water conservation? Have you been affected by the weather in your neck of the woods?