I have never personally experienced this phenomenon when visiting this beautiful country, so I didn’t quite believe my friend Christine MacKenzie when she had said on her blog post that the sun does shine in England. Well you can only imagine how excited I was when I stumbled upon this picture that was taken towards the end of April. 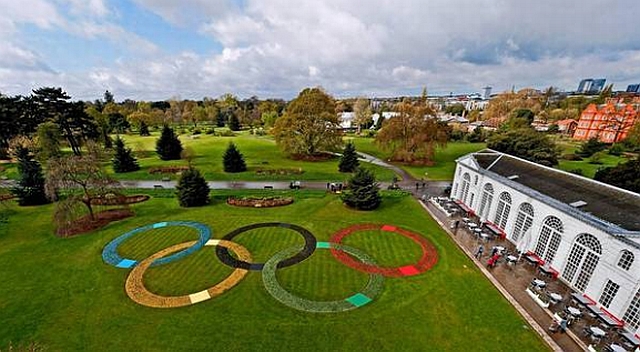 Look! The sky is bright as the clouds depart, the sun shines over large Olympic rings that decorate this lush emerald green lawn at the Royal Botanic Gardens, near London. At the start of July, England’s capital is hosting the Summer Olympics.

First, for those of you who don’t know, there’s a certain event that’s also been making a big splash across the pond over the last several days. It seems England has a preoccupation with this thing called a Monarchy. Apparently their Queen, that would be Queen Elizabeth II, who is now 86 years old by the way, is celebrating her Diamond Jubilee—60 years of reigning over the British Empire. No other British Monarch over the last 1,000 years has reigned for that amount of time except Queen Victoria.

It’s hard to conceive just how many people will invade London, England to attend these two enormous occasions. The crowds, the police, all the pomp and circumstance—It’s quite an undertaking. Yet, there is a special event towards the end of this summer that will be like icing on a cake! Like dessert with a cherry on top.

This would be known as the Paralympics!

The first Paralympic games were held in Rome in 1960. Since then, there have been 14 games. This year, with its 4200 participants set to take part from all over the world, it will be the biggest game of its kind ever. For the first time, London will host the event starting August 29th through September 9th with 16 new countries represented.

The Paralympics has become so big that the event will be broadcast to an estimated 4 billion people around the world. And this past Monday, June 4th, it was announced that the British rock band Coldplay will perform at the games closing ceremony.

For those with inquiring minds, here are some of the events taking place:

L.A. Galaxy Football star David Beckham described the event as a “real privilege.” He said, “This has just been one of the most exciting things. There have been…two million kids around the country trying out Paralympic sport. It is so amazing.” And that’s just in England. Beckham was part of the Olympic bid team that brought it to the country. To anyone who still thinks that disability sport is not a real sport and that it doesn’t count, Beckham said: “Give it a try— it is as simple as that. You do not learn anything until you try.”

And try he did. Here’s Beckham playing blind football with a team at a London school.

So inspiring that for the very first time, tickets for the Paralympics are expected to sell out!

Whether we’re athletes or artists, we all have special gifts—although some may be more inspiring than others. But I think we can all agree that no matter what the weather is forecast to be, while those amazing athletes compete for Olympic greatness, the sun will shine over not just England, but the entire globe! 🙂

So what do you think? Have you ever traveled over the pond to England? Are you planning to attend or watch the Olympics? What are some of the games that you enjoy watching? Had you ever heard of the Paralympics? Have you known anyone who has competed in an Olympic event?