On one bright September morning in 2004, I looked down on my right ring finger and discovered a bite. My eyes flashed up at my husband. He knows me so well. “DON’T PANIC,” he said, “it’s only a mosquito bite.”

Why would I panic over a little mosquito bite?

There was an outbreak of West Nile virus.

Okay, I told myself. He’s right. It’s just a little bite and it’s probably like so many of the other mosquito bites that I’ve received in my life. For some reason, those little suckers just love me. And why not? I’m a sweet kind of girl. 🙂 So I went on with my day. Ran some errands, caught up with a friend over an iced Mocha Latte at a nearby Starbucks, then went home and started dinner and it was all forgotten by the time I went to bed that evening.

The next day I was tired. I mean, dragging-my-butt-around-tired. I tried getting on my rebounder to exercise thinking this would help. Get that blood circulating Karen! You’ll feel much better! But all through the day it was like watching myself in slow motion.

Then came the next morning. And when I woke up, oh boy did I ever take notice. Why? Because I literally couldn’t move. I couldn’t turn over in bed. I was stiff as a corpse. Now by this time, it was Friday.

With a fever, I forced myself with great effort to get out of bed and was rewarded with a horrific headache. Every beat of my heart pounded through my skull. Something was up and I had the funny feeling that it had something to do with that blasted mosquito. But I still tried not to PANIC.

I grabbed the phone and called the doctor. At first, I had a funny feeling that they wouldn’t believe my suspicions. Oh no, it’s just wacko Karen calling. Sure you think you have West Nile. Uh-huh. “Well, if you’re not feeling better by Monday,” they said, “call us and we’ll fit you in. And if you get worse over the weekend, go to the emergency room.”

You mean if I’m not dead by Monday. LOL! Ah, I was in for a fun weekend.

Well, you have to know that I am into all things natural. It is not in my nature to run to the doctor or to the hospital for every little thing. So I got my own arsenal of viral fighting goodies out and started my own battle. But as the weekend progressed, I could tell, this was no ordinary bug I was fighting. I was sick. Very sick.

I made it through the weekend and bright and early Monday morning I called the doctor and they told me to come in right away. My husband took off work and brought me in about mid-morning. We both sat across from the doctor as I told him about the bite on my finger and my symptoms. My doctor told us that they would run the necessary tests.

You see, because West Nile is a virus, there isn’t much that doctors or hospitals can do. They can’t give you an antibiotic. It’s not a bacterial infection. I have to tell you, this is when I thanked God that I knew my doctor. (An MD/H)

“I know how to treat it,” he said. “I am currently treating another patient and he is doing very well.” As you can imagine, those were words I will never forget. He started treatment that very day. And for four days a week over the next four weeks, I had to come into his office to get treatment.

I have to tell you, at first, it was a close call. My doctor wasn’t sure I was even going to make it. My husband, two sons and sister watched over me day and night for days on end. I thought I was going to die. Though the aftereffects from the virus didn’t leave me unscathed, I am so grateful for every day of my life since I pulled through.

So why do I bother to bring this up?

With good reason. It seems that some of you are at threat. Just last month, officials in New York City said that West Nile virus has been found on Staten Island, one of the city’s five boroughs. And more than 80 percent of all reported cases this year are from six states: Texas, Mississippi, Louisiana, Oklahoma, South Dakota and California, with almost half of all cases reported from Texas.

Texas reports that it is battling an outbreak of this wicked virus, with at least 11 deaths (A total of 26 deaths in the U.S.) and another 381 reported sick (A total of 1100 cases in the U.S as of today). In fact, Texas is on track to have the most cases of West Nile since the disease first appeared in the state back in 2002. This has forced Dallas Mayor Michael Rawlings to declare a local state of disaster.

What will declaring a local state of disaster do?

In Phoenix, where I contracted the virus, this meant they started to spray—insecticide. Yes, tanker-trucks drove down residential streets in the wee hours of the night sending a mist of foggy insecticide into the air. But as you know, in Texas they do things in a big way. They’ve chosen to crop dust the entire city of Dallas and its suburbs, except for President Bush’s neighborhood.

What can you personally do?

First of all, stay indoors while they’re spraying. You would not believe the host of other problems that are caused by direct exposure to insecticide spraying. In addition, the CDC recommends using an insect repellent that contains one of the following ingredients: DEET, picardin, oil of lemon eucalyptus. Personally, I would go with the eucalyptus because, well, it’s natural. But the ingredients suggested by the Environmental Protection Agency provide practical long-lasting protection against mosquito bites.

They also suggest wearing long sleeves and pants, or staying indoors, at dusk and dawn, when mosquitoes are most active. Mosquitoes breed in standing water, so remove standing water from flower pots, pet dishes, buckets and barrels and children’s wading pools to reduce the chance of transmission.

So remember, if you see one of these… 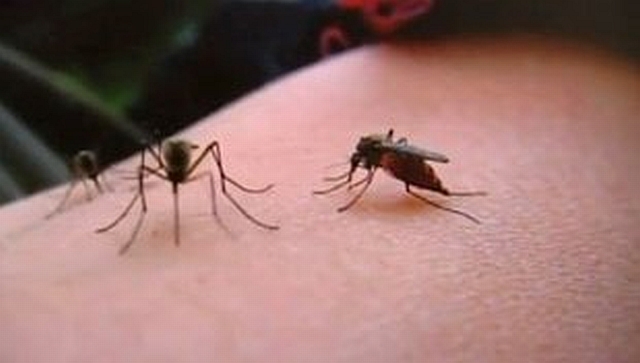 Get ‘em before they get you! And Smack ‘em Dead!

Here is a link to find out more about the history of the virus and its symptoms :


So what do you think? That might be a loaded question today! 🙂 Yet, how many of you were aware of the West Nile virus or are plagued by those nasty misquitoes? The end of the season is still a few months away. What precautionary measures do you and your family take to guard against this or other viruses? And how is your summer been thus far? I hope that you haven’t been bitten!


Thank you everyone for dropping by and for all your wonderful comments!
Karen