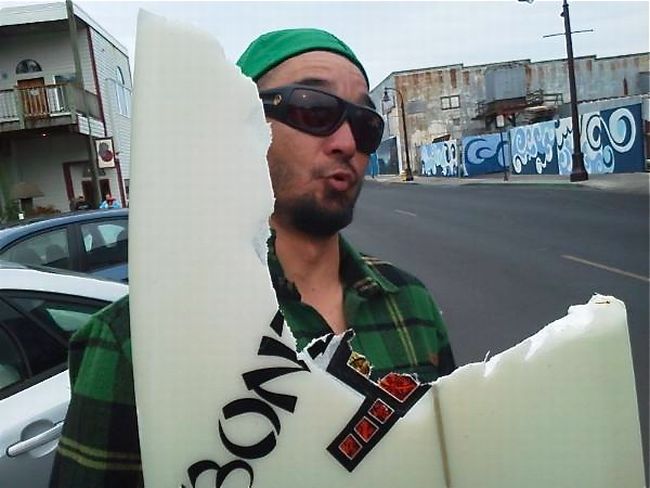 That’s what Bobby Gumm, not to be confused with Bubba Gump, must’ve thought when a large great white shark took a huge chunk out of his surfboard off the northern Oregon coast while he sat there terrified.

Bobby Gumm is a chef in the quaint coastal town of Newport and was roughly 600 feet off South beach when an estimated sixteen foot shark tried to take him for his next meal. On its first approach it had brushed against his leg, then took a ferocious bite and ripped off the front of his board lifting him out of the water.

Observers were quoted as saying that it looked like a bunch of piranha were churning up the sea, when all of a sudden a dorsal fin was spotted at least two feet high, then watched as Mr. Gumm was shot up in the air like Old Faithful out of the water. Cowabunga dude!

Gumm is a native of Hawaii so surfing is in his blood, but he was counting his blessings that day, all five of them—his children as he arrived back safely into shore. And when he got home, he kissed each and every one of them. Yes, he was grateful and he credits his survival to a morning prayer he says everyday before surfing.

So even though white sharks are commonly known to hang out off the Northern California coast in fall, they can on occasion be spotted off the coastline of Oregon. They prey on elephant seals and sea lions. Really? That’s interesting. It seems this particular shark had apparently mistaken Mr. Gumm’s silhouette as one of the many pinnipeds. Oh, that makes me feel so much better. It was mistaken identity. Right.

Okay, if that’s the case, then what accounts for the deaths of three more people who have died recently off the southwest coast of Australia, a renowned aquatic playground from a rogue man-eating predator? This area of the world has been better known for dolphin and whale watching cruises, white sandy beaches, world-class surf breaks and the peppery Shiraz of its Margaret River wineries than for shark attacks.

A 32 year old Florida man who had moved to the area six months ago was diving solo off a boat by Rottnest Island, a few miles away from the city of Perth. Again, just like Bobby Gumm, he was attacked last week. But this time someone died. This episode pushed Australian authorities to take emergency legal action, then set up tuna-bait hooks as a deterrent to protect the area’s many inhabitants for the first time in history since the great white was named a protected specie.

Since I live off the southern coastline of California, a well known surfing mecca, it made me think. At any given moment, one of hundreds of surfers who ride the waves, come off the lip or shoot the pier could end up the same way. Yet, just as these other individuals, they all must recognize the potential danger involved before they take the risk, right?

How many of us think about the risk we take in our everyday lives? We may feel there are days when we are swimming amongst the sharks and that at any turn we could come under attack. Then there are others who have already been assaulted, undergone surgery and are now going through therapy licking their wounds.

Some of us lately have been going through real challenges in our lives. Some have been dealing with sickness, death, unemployment, family issues, and the list goes on. Although we try not to make this our main concern, sometimes it’s all we can do to get through the day. Just know that you are not alone.

Yes, there are times when we all need to put things into perspective, but sometimes there is really nothing we can do. Sometimes—reality bites!

So please let me, what do you think? Do you or have you ever surfed? Do you enjoy snorkeling along the shore? Do you feel safe? And how many of you feel like you’ve been attacked lately by one of life’s many unexpected challenges? Because it seems like we are all going through one thing or another and we could use a little encouragement.