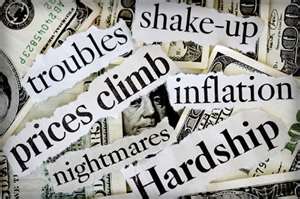 I think it is safe to say that most of us have been hit by this recession in one way or another. For those of us who have been fortunate enough to have our jobs in tact, our money isn’t going any further and with inflation we might be trying to cut back on some of our expenses. Maybe we hold off on certain unnecessary purchases. It might mean we may not go out to eat as often and take fewer vacations. We may be cutting out more coupons in the newspaper or watching for Groupon specials. We might even stretch out the number of times we get our hair cut, go to the movies, or take the kids to the toy store.

But for the unfortunate ones that have been hit the most, this might mean the loss of a job, living on one income instead of two or possibly with no income at all. They might be eating more rice and beans than hamburger or chicken. Perhaps they’ve been forced to play “Go Fish” when it comes to paying their bills. They are unable to afford new clothes for the children, let alone buy new toys. And like so many today, they may be upside-down with their mortgage, which in the state of California is hovering over 44%. They may have had to move in with a close family member or friend when the bank decided to foreclose on their house.

Whether it is a relative, neighbor or friend, at this point we all know someone that has been affected by this extended economic downturn. And as it rolls over from one year to the next, it can be inspiring to watch the fortitude and resourcefulness for which through the ages has strengthened our fellow man around the globe.

Take for instance a certain Irishman in the city of Dublin. As we all know Ireland has had its share of financial woes throughout the years or perhaps even for centuries. They did have a slight glimpse of economic sunshine during the 1990’s until its intensity dimmed during the world monetary banking crisis that started in 2008.

What did this unemployed Irish artist do when push came to shove? Well, what would any unemployed creative person do?

Frank Buckley had originally wanted to create a gallery for his mixed-media artwork called “Expressions of Recession”, but he ended up building a house instead. What would you do if someone handed you $1.4 billion euro dollars? In Ireland, people build houses out of it.

It seems that Ireland’s mint has lent their shredded money to Mr. Buckley. And for roughly 12 hours a day, every day since the beginning of December, he has been fast at work laying 50,000 decommissioned Irish Euro bricks into the construction of his house that contains a bedroom, bath, and living room. He plans to continue expanding the house that sits in the lobby of an empty office building to include a kitchen, shower, and patio.

If you’re wondering how it feels to live in a house made out of paper currency, this Irish artist said that it’s quite warm inside: “Whatever you say about the Euro, it’s a great insulator.” Mr. Buckley is one of countless amount people from all over the world that have been affected by this recession.

“It’s the reflection of the whole madness that has gripped us,” he said. “People were pouring billions into buildings that are now worth nothing.” So the reason why he built the house was because he “wanted to create something from nothing.”

It will take about two more months to complete the building of his new home, but Frank Buckley welcomes any visitor who wants to take a look at his billion-dollar masterpiece.

Yes optimism is alive and well and has always been in the hearts of the people of Ireland and the rest of the world. It just shows that with a little ingenuity and imagination what we can all recreate in our own hopes and dreams. You see, a little bit O’Money Ain’t For Nothing! 🙂

So what do you think? If you were to go through an economic crisis, would you have been that ingenious? As an artist, what would you do to make a statement about your predicament? Are there some fun ideas that you and your family or friends have found while helping to cut back on expenses that you would like to share?

Now if I may I would like to change the subject.


I finally have the results from the drawing at Diane Capri’s launch day party for “Don’t Know Jack!” Thanks for your patience. It took some time, but I worked Diane over for extra prizes and I think all of you will be pleased!

First, we have five winners from the first day of the drawing!

These five winners will receive a FREE Kindle copy of “Don’t Know Jack”! But that’s not all. You will also receive a FREE Kindle copy of EITHER Lee Child’s “Killing Floor” OR Lee Child’s “Bad Luck and Trouble.” In order for you to receive your prize, you will need to leave your email address at Diane Capri’s website, http://dianecapri.com/contact/ . And don’t worry if you don’t have a Kindle because Diane can help you convert her books to a format of your choice.

See, I told you it would be good! You not only receive one book, but two FREE books!

Ready? Here are the winners:

But that’s not all!

For those of you who commented on the first day of the launch, Diane has decided to award the rest of you with a FREE copy of Lee Child’s book “Killing Floor” OR “Bad Luck and Trouble.” This will be of your choosing, but you must purchase a copy of her book, “Don’t Know Jack” and the Lee Child book will be gifted to you through Amazon. (A proof of purchase will be required.)

Then for those that arrived fashionably late for the party, that is after her launch date of February 1st, Diane has also decided to award you with a FREE copy of Lee Child’s book “Killing Floor” OR “Bad Luck and Trouble”. This will also be of your choosing, but you must purchase two copies of “Don’t Know Jack” and the Lee Child book will be gifted to you through Amazon. (A proof of purchase will be required.)

The winner’s of the prize for naming a character in Diane Capri’s new book in the “Hunt for Reacher” series “Get Jack Back” are Fabio Bueno and Lynn Kelley! Diane will contact you both to finalize your choices.

Now wasn’t this exciting? I love it when everyone comes out a winner!!!!

Congratulations to all and thank you for making Diane Capri’s launch day of “Don’t Know Jack” a memorable one!