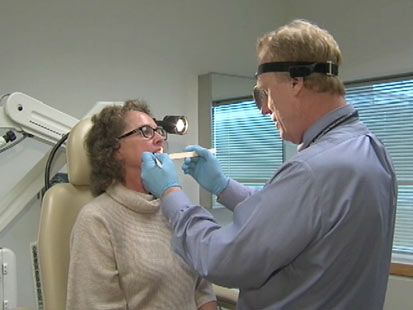 After just writing a post about kicking and screaming, you can imagine how dumbfounded I was when I learned of a woman who had lost her voice for almost thirty years. Okay, I guess it’s true—you could communicate by written word or sign language, yet have you ever thought of what it would be like to not have a voice?

Most times when we think of someone with a sensory disability we immediately assume it has to do with loss of hearing or perhaps blindness. But think how frustrating it would be to lose the ability to use one’s own voice.

Now I know to some, like my Husband or my two sons, they probably would’ve loved for me at some point in my life to have lost my voice. LOL!!! Ah, the thought of no one to argue with, no one to tell my two son’s to get up in the morning, to get ready for school, to brush their teeth, to clean their rooms, to do their homework, to feed the dog. Well you get my point.

However that is what happened to a woman named Betty Lou Trufant, a resident of Westbrook, Maine in 1982 after contracting a strange virus. It was the virus that had caused her vocal cords to become paralyzed, thus her inability to speak, laugh or sing.

This brings to mind the tragic story of Julie Andrews and how her beautiful ability to sing was affected or more recently country music singer Shania Twain or British soulful songstress Adele.

Think about it. A voice is one instrument you cannot purchase at a music store!

Betty Lou was resigned to live this way for the rest of her life until she watched a segment of the news about a woman in a similar situation who had regained her voice after four months by getting throat massages at the Cleveland Clinic in Ohio.

Encouraged by this news, Betty Lou travelled to the clinic to see if doctors could also find a remedy for her. Once there, she was told that a massage wouldn’t be enough to cure her, but there was an operation that would enable her to speak again and that she could even sing!

The decision was made, and after an hour and twenty minute procedure, she was back to full health able to talk, laugh and sing at full volume for the first time in over 29 years and now has a new lease on life with her voice restored to its former glory!

How might we relate to this? Well as writers we might liken it to being stricken with writer’s block. Like a virus, our writer’s voice suddenly disappears. Some may scoff at this idea saying there is no such thing. But like a virus, our minds can become infected by negative thoughts that can leave us paralyzed if unattended. Yet we can be thankful this is only a temporary condition, for our voices carry.

So what do you think? Many of us may have had at one time or another a form of laryngitis, but could you ever imagine living without a voice or as a writer being paralyzed, not able to put down all your thoughts onto the page? What would you do? Would you allow a disability to inhibit your enjoyment out of life and just give up or would you be able to have the mindset to push forward?

If you enjoyed this, I encourage you to follow by email for future posts.

A big thanks to all my new WANA friends and all others that may grace my presence by visiting this post. Take care and make it a great day!