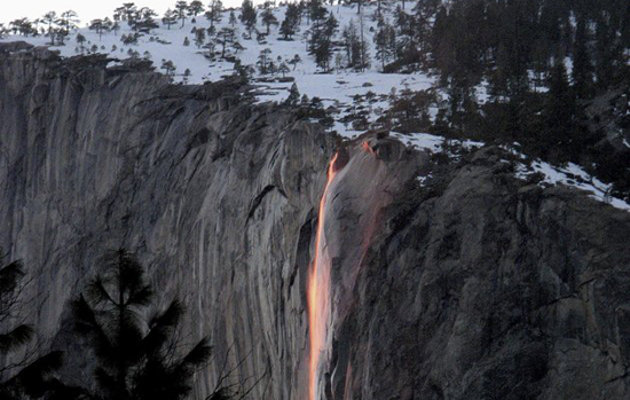 Isn’t that an amazing picture? What is it? At first glance it looks to be a flow of molten lava, something that you’d expect to see coming from volcanic activity. Perhaps you would expect to see something like this on the big Island of Hawaii, in Indonesia or the Philippine Islands. Why there are a plethora of volcanoes all over the world for that matter.

Yet this actually is not a river flowing of magma emission. This is a rare phenomenon that happens for only a two week period during the year. This magnificent marvel of cosmic alignment happens in a small window of time, a flashing moment at sunset if, and only if weather permits it.


Where is it you ask?

Each year countless nature photographers converge upon Yosemite National Park to capture the evanescent spectacle of Horsetail Fall, its longest free-falling waterfall with a drop of 1,500 feet along the granite face of El Capitan. They pass the time hoping for clear skies so they may duplicate this manifestation that was first recorded in color back in 1973 by photographer Galen Rowell.

Michael Frye who wrote the book, “The Photographer’s Guide to Yosemite” said that “Horsetail is so uniquely situated that I don’t know of any other waterfall on earth that gets that kind of light.”

For many years before this occurrence was captured, photographers only had to point and shoot to obtain another famous Yosemite firefall which was man-made—a cascade of embers that was pushed from a bonfire on summer nights off Glacier Point.

But all this has become a lesson in Physics, Geometry and Astronomy as photographers study the angle measured from north eastward along the horizon where the vertical circle intersects, otherwise known as azimuth, a horizontal angle of bearing.

A horizontal angle of what? Let’s keep this simple, shall we?

The azimuth degrees and minutes of the earth’s orbit are relative to the sun that defines the best time of day to encounter it. So they wait patiently looking for the lowest angle of light that will shower Horsetail Fall with a kaleidoscopic sunset while the sun’s rays reflect off the granite directly behind the water which may vary in levels of intensity over the course of the same two weeks of the year, every year.

You can imagine all the calculation and timing it takes along with the cooperation with nature to be successful because Horsetail Fall empties into a small area on the eastern summit of El Capitan and only flows during winter and springtime in years with adequate rain and snow, which has been scarce this year, although the experts say it doesn’t have to take a lot of water to light up the fall.

But most importantly, the southwestern sky must be clear and February is the peak time of year when storm clouds often obscure the setting sun. So when the environment cooperates and conditions come together, the scrawny Horsetail Fall is the shining star of the park.

The Fall lights up like fire around dusk and last for just about two minutes. And with the recent storms and snow, this means the persnickety fall is flowing again and park officials are hopeful that it will last at least through February 24th, which generally is the last day of the year to catch a glimpse of it.

“If you hit it at just the right time, it turns this amazing color of gold or red-orange,” said Frye, a photo instructor with the Ansel Adams Gallery in the park.

Though the popularity is reminiscent of an actual fiery fall that entertained guests in the park from 1930 to 1968, there’s no comparison to the natural activities and occurrences in Yosemite that are far more amazing and more valuable— everything from a sunset to wildlife to rainbows at Vernal Fall.

Yes the majestic Horsetail Fall is a fire fall—a true marvel of nature!

So what do you think? Have you ever had the opportunity to visit Yosemite National Park? Have you ever seen the likes of such a phenomenon? What volcanoes or waterfalls have you had a chance to visit? What are the things that you enjoy about nature? And how do they inspire you?