My post today isn’t about an architectural fantasy involving Antonio Contino’s bridge in Venice over the Rio di Palazzo, erected in the year 1600, connecting the Doge’s prisons with the inquisitor’s rooms of the main palace. Although it was Lord Byron who helped to popularize this belief by naming that water overpass, “Bridge of Sighs.”

Nor am I talking about a song with the same title written by a British guitarist in the mid 1970’s named Robin Trower.

No, I am talking about another world famous bridge that just celebrated 75 years of expansion over the San Francisco bay, the “Golden Gate” bridge. And it was just last weekend, on May 27th that the city celebrated with fireworks and crowning sun-bright sparkle enhancements. 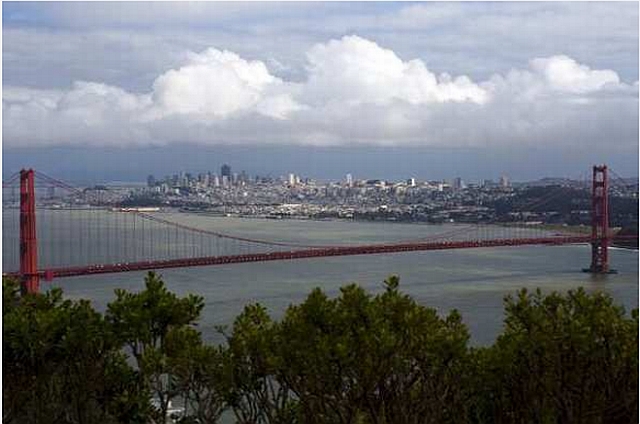 Like a diamond set atop of the bridge’s own tower’s, it began flashing narrow beams of reflective light throughout the San Francisco Bay area in an installation matrimony of art and science—a project called Solar Beacon, all part of a yearlong celebration of the bridge.

Two sets of mirrors or heliostats sit on top of the bridge’s two 746 foot towers, two feet apart, swivel and tilt by motors directed by cellphone commands. They call this Art in Progress. “It’s never been done before and we don’t know what it’s going to look like,” said Mr. Vallerga, one of the volunteers.

Normally, they build this type of thing for astronomical spacecraft, including the ones bound for Pluto and Jupiter. That kind of work is very utilitarian and it’s not often appreciated for its artistic value. The idea started when Mr. Vallerga and his colleague Pat Jelinsky approached an artist-in-residence, Liliane Lijn at a space lab in London in 2005.

They wanted to build prism heliostats that would convert sunlight into refracted rainbow of colors that would beam from on top of a hill, like the Hollywood Hills in Los Angeles or near the Griffith Observatory, but they were unable to drum up enough support. Thus the Golden Gate’s 75th Diamond Anniversary with a mountain ridge in France soon on the horizon.

So why the reference to the Golden Gate as a Bridge of Sighs?

Apparently the bridge is a public health hazard. Because it doesn’t have adequate safety barriers, it continues to be the world’s most popular suicide location. Since its opening on May 27, 1937, there have been an estimated 1,558 deaths by jumping. And that’s only counting those they’ve been able to recover. In other words, it’s estimated that every two and a half days someone tries to jump. 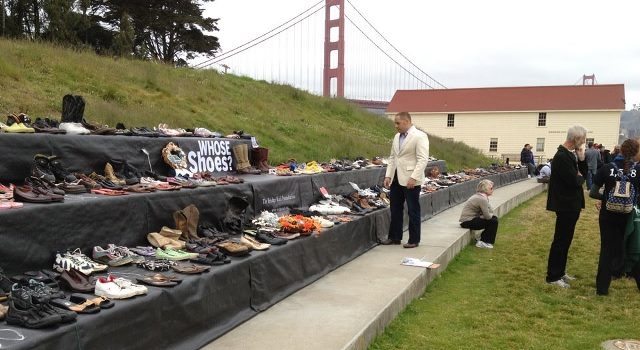 (Kevin Hines views an exhibit of 1,558 pairs of shoes during the celebration. The shoes represent known suicides that have jumped from the bridge. Hines, one of six people to survive a suicide attempt from the bridge, urges barriers be installed.)

The disquieting number of suicides speaks of a dark history surrounding this renowned public structure. With all its beauty and brilliance in engineering and construction, the question is asked, “How do we weigh its value against the reality of tragedy?”

Officials have voted to install a suicide deterrent to the bridge, but no money has been allotted. Then there are those who oppose a barrier because they think it will ruin the appearance of the bridge, yet the Eiffel Tower, the Empire State Building, St. Peter’s Basilica, the Duomo in Florence, the Sydney Harbour Bridge and many other international landmarks have suicide barriers. But not the Golden Gate Bridge?

A happy anniversary to you Golden Gate Bridge!

Well, perhaps not. It is felt that only when the Golden Gate Bridge has a safety net will the day truly be worth celebrating. Until that time, it will continue to be thought of as a “Bridge of Sighs.”

So what do you think? Have you ever traveled to Venice, Italy and walked across the “Bridge of Sighs?” Have you taken a trip to the San Francisco area and driven across the “Golden Gate Bridge,” perhaps on a day trip to the wine country? Have you ever written a character that may have jumped off a bridge? Or taken a leap of faith?

36 thoughts on “Bridge of Sighs”